Letting the lines of life direct the brush

For those of you how missed it or do not receive the Glasshouse Country Newspaper, check out last weeks front cover and featured article! 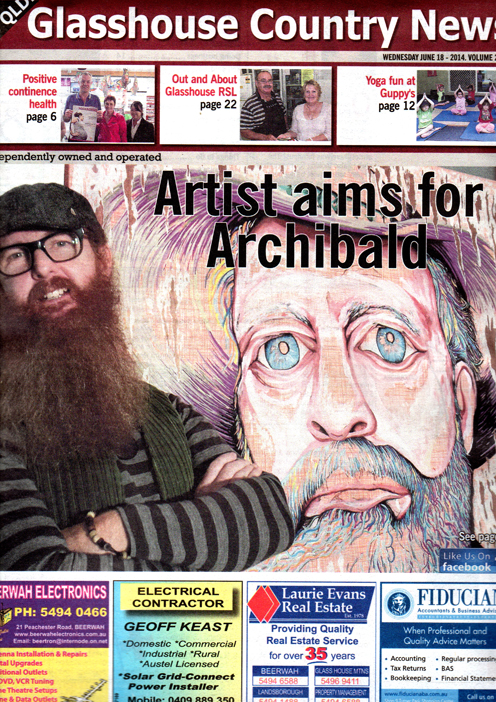 Sunshine Coast artist Darren Trebilco has been receiving accolades for this year’s Archibald Portrait Prize entry from those have been visiting his studio to view the piece as it has taken shape.  Owner of the Solitude Art Gallery/Open Studio in Glenview, Darren says that some avid visitors have been dropping in weekly to see the progress and direction he has taken on his portrait of ‘Hat Fitz’, the Australian wild man of blues. While previous years have seen Darren’s latest work closed off to the public, through his newly-opened Art Gallery and Open Studio, the public can now see each phase of development that a major piece like this goes through and even ask the artist questions.

Darren’s portrait sitter for this year’s Archibald, ‘Hat Fitz’, has the “face of a weathered, bearded mountain man and the personality of an Aussie larrikin,” and Darren was excited by the idea of creating such an intriguing face in paint.  Hat Fitz’s wife, the other half of the dynamic blues duo, Hat Fitz and Cara, have said that they were very pleased with Darren’s work and felt as though the piece had “really captured ‘Fitzy’.”

Venturing into uncharted territory this year, the dynamic artist has taken a completely different approach to his previous entries in the Archibald Prize.  Darren says he has removed the thought process of painting.  “I’ve opted for a ‘Mu shin’ no mind approach by allowing my hand to do the creating,” he says.  “This is a style I have called ‘Now-ism’.”

The artist mentioned that he had no preconceived ideas on how he wanted the final portrait piece to look.  “I strove to be in the moment and let the lines of life engraved into Fitzy’s face direct the flow of the brush.”  The Glenview artist said that he felt he had encapsulated the true essence of his sitter and couldn’t be happier with this year’s Archibald Portrait entry.

With the piece standing at 1.8 meters tall by 1.5 meters wide, Darren chose to steer away from the traditional canvas surface , opting instead for a wide frame covered in timbre and wallpaper.  “Fitzy is a simple man.  He doesn’t stand on ceremony and canvas just seemed a little too refined a surface for depicting this man’s bumpy life.”

Darren’s latest artwork is a combination of techniques that the professional artist has been developing and honing throughout his career.  With the colour, quality and vibrancy that the Sunshine Coast has come to expect from Trebilco artwork, each piece offers an energy of originality and strength.

Darren likens the process of painting to being a “kid in a candy store, wanting one of these and one of those and kind of mixing them all up.”   Throw in the personality of the colourful, wild and hairy Sunshine Coast artist and you have a very interesting recipe for some untamed and innovative artwork!

The Artwork will be couriered down to the NSW Art Gallery for judging on the 12th June, with the finalist being notified on the 10th of July and the winner of the 2014 Archibald Portrait Prize will be announced on 18th July.

You can visit the Solitude Art Gallery located at 163 Glenview Road, Glenview to view further artwork created by Darren Trebilco, visit his website at www.solitudeart.com.au or follow the Solitude Art (Official) Gallery on Facebook or Instagram. 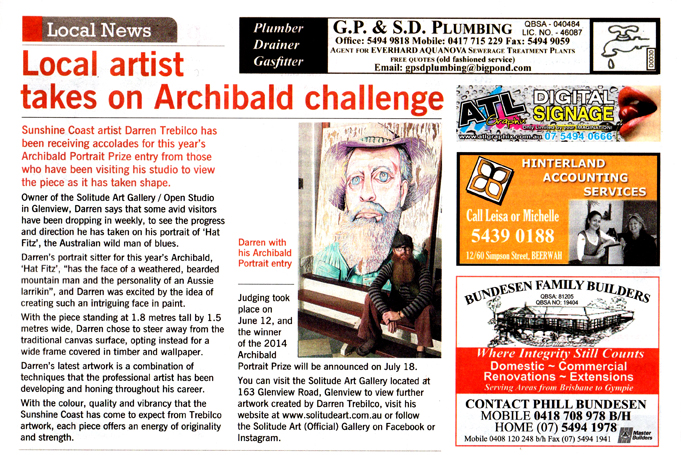