An Artist Rising Up 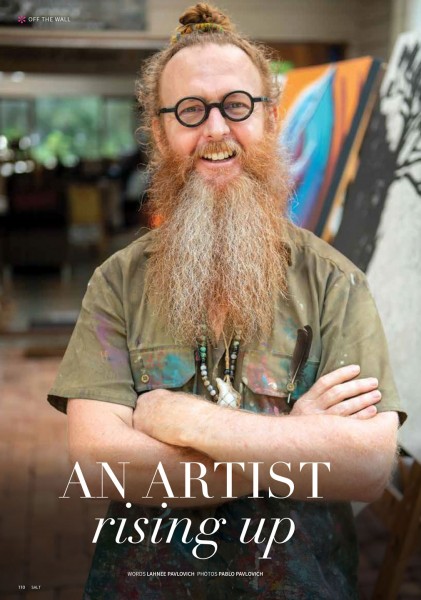 An Artist Rising Up
Article by Lahnee Pavlovich

The first thing I notice pulling into the driveway at Solitude Art Gallery is the music. Well, maybe it’s the bamboo trees hidden among rugged green bushland, but then again, I’m pretty certain it is the music. Loud and boisterous coming from inside the gallery. I walk in a little bemused and find Darren Trebilco, shirt off, brush in hand, painting strokes to the beat.

It was at that moment I knew he would have an interesting story to tell – and he did. Even his paintings told me a multitude of stories as I strolled the gallery waiting for him to put the final touches on a signature piece for his upcoming show, Rise Up.

There is no denying his work is eclectic, rebellious even, with no real consistency other than its beauty and impact. But that’s because Darren isn’t the type of artist who likes to colour within the lines.

“I paint through feeling and emotion, and I paint what’s around me, the things that stand out to me and make me feel something whether that’s a trigger that comes up from my time in the Army, or a peacock that found its way into our house for three months, or most recently a lot of work is inspired by my 10 month old daughter and this new energy she has brought to my life,” Darren says.

“I don’t like to be stuck inside the box, I want to be free to express myself in my art without worrying too much about the formal parameters and that’s part of the reason I opened my own gallery too,” he says. “It brings me freedom and I can paint the things that hit me hard in the gut or make my heart sing.”

Witnessing him in all his glory, within the open aired studio nestled by his family home, there is a certain warmness about him. You would think Darren was one of those kids who spent his childhood playing out in nature and drawing for fun. But this wasn’t the case.

“I was always creative, I suppose my parents tried to squash that a bit as a kid though, they kept telling me I needed to focus more on my education and getting a real job. There were issues within my family life too, so I got out of home young and joined the Army at 17,” he says.

A move that inevitably shaped most of his life and inspired his artwork.

“During my 13-year career with the Army I started using art to express how I was feeling and it helped me deal with a lot of things I had going on,” Darren says. “From there the art developed naturally, friends and family paying for materials in exchange for a painting.”

The commercial side of it didn’t come for quite a while though.

“Nothing happened until I was medically discharged from the Army and everything I knew was gone in an instant,” he says, a certain bewilderment in his voice.

“It was such a tough time and I hit rock bottom. I guess it was this point where I emerged as a new person though,” he says. “I went from job to job, nothing came from it, but the creative stuff kept coming because it’s how I expressed myself. I finally learnt how to open myself up to the universe and what it was bringing me, and this was the real starting point for my art.” 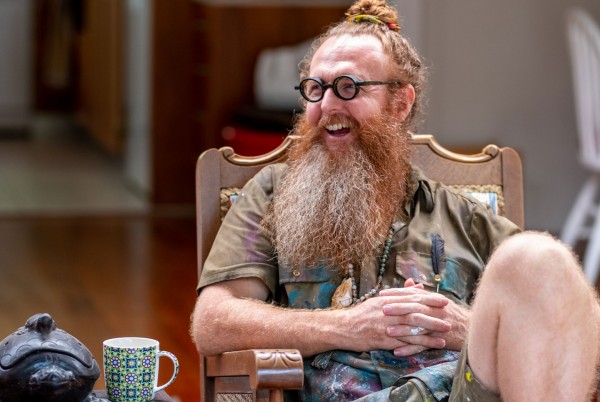 “Now I’m like a kid in a candy store – I see how the light hits a leaf, or the washing on the line, the different shapes it creates and that’s my inspiration. I don’t limit myself or let myself get stuck in the box. I don’t want to be restricted like I was in the Army; I want to punch out and expand and allow anything to happen,” he says with a big smile.

Everything about Darren reflects this too. His Army days may have gotten him to this point, but his thirst for life, his rebellion against constraints are evident not only in his work but in him; his wild untamed hair and beard, paint splattered clothing, the inspirational words scribbled across his work space, the flow he embraces in his life and within his home. It’s a beauty in itself.

And now, 13 years after leaving the Army, five years after opening his own gallery, and 10 months after his wife gave birth to their beautiful daughter, Darren is feeling like he has reached a sense of balance. And that’s the theme for his upcoming show, Rise Up which will take place in June.

“All these changes in my life, and especially the birth of my daughter, has opened up a new, fresh energy in me. My headspace is all about this crisp and vibrant feeling, and the grounding I’m experiencing through it all so that’s the real inspiration for the show,” he says.

“The new stuff coming through is a big shift and I’m feeling ready to let loose, give myself no restrictions and just create pieces around this positive energy. That’s the only real theme for it too. I have pieces in red ochre that I created kneeling in the dirt, and bright, joyful pieces that shaped themselves from throwing paint at a canvas – its all just a sense of expression and emotion I’m bringing through,” he says.

And as a guest in his space, I could really feel it too. This organic, raw, real energy that flows through the gallery and into the work on display.

“It’s all heart and soul, blood, sweat. It is me, and I reinvent myself with every single piece. I deal with emotions through the artwork and when it is finished the energy is released with it,” Darren says.

“I want people to feel that too because at the end of the day I believe it’s the artwork that chooses the buyer, not the other way around,” he says. “You experience the process that has gone into an original piece, you can feel it because it feels different to something that was mass produced.”

But don’t just take our word for it, visit the show yourself and see how each piece moves you. 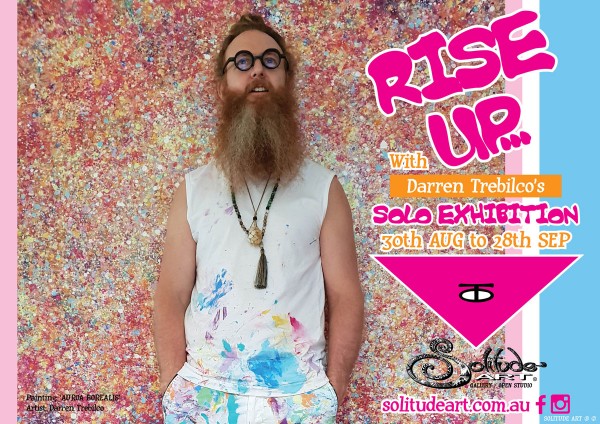 The Solitude Art Gallery / Open Studio is located at 163 Glenview Rd, Glenview and open 10am – 5pm Wednesday to Saturday.
You can find out more or stay up to date at solitudeart.com.au or by following Darren HERE